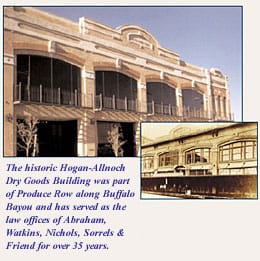 The Abraham, Watkins, Nichols, Agosto, Aziz & Stogner Law Firm is located along Houston’s Buffalo Bayou at 800 Commerce Street, in the historic Abraham Watkins Building. The building originally consisted of two separate structures built at different times. The smaller of the two, the Siewerssen Building, was built in 1894 and served as a meat storage facility and market. The Dickson Building was constructed in 1905 and connected to the east end of the Siewerssen Building. The Dickson Building was home to the Hogan-AIInoch Dry Goods Company. The resulting Siewerssen Dickson Building became part of Houston’s “Produce Row” during the early 1900s where meats, produce, and dry goods were shipped on Buffalo Bayou and unloaded for storage and public sale.

The Hill, Kronzer & Abraham Law Firm was founded in 1951. Approximately 20 years later, the Firm decided to acquire a historic downtown building. In 1971, as part of Houston’s effort to revitalize downtown, the Firm purchased the then vacant Siewerssen Dickson Building planning to restore it as an office building. Firm partner Frank Abraham had a vision and assumed the management role of this project.

The Firm commissioned the prestigious architectural group of Crain, Anderson & Reynolds to design “the most memorable law firm office in Houston.” The paramount goal was to maintain the original integrity of the structure, while creating a fully functional law office. Today, the original brick masonry, heavily timbered second floor, and oak ceiling rafters contribute prominently to the ambiance and character of the building and the Law Firm -symbolizing strength and justice.

The building was designed in the “Early Texas Federal Style,” featuring 22-foot ceilings, custom-designed majestic doors made of Honduran mahogany crowned with a Texas Lone Star, skylights, and massive chandeliers. The balcony-style third floor was created by removing the middle interior of that floor. This allowed the architects to utilize natural lighting from the skylights and bay windows to illuminate the expansive second floor reception area. The receptionist desk was designed to resemble the Clerk of Courts’ reception desk, and is also adorned with carved Texas Lone Stars. The Abraham Watkins Building renovation has been recognized by the Houston Municipal Arts Commission and the Houston Chapter of the American Institute of Architects.

The Firm moved into its newly renovated Abraham Watkins Building in January 1975 and continues its trial practice today. Abraham, Watkins, Nichols, Agosto, Aziz & Stogner is now recognized as the oldest and one of the most prestigious personal injury law firms in Texas. The Abraham Watkins Building continues to inspire the lawyers who work in it and impress those who enter.

Walk through our historic building and see where our legal team works below: