Jennifer O’Brien Stogner was born in Galveston and raised in Corpus Christi, Texas. She graduated from Mary Carroll High School in 1997 and Texas A&M University – Corpus Christi in 2002 with a double major in Finance and Accounting. During college, Jennifer worked as a legal secretary for her father, Michael O’Brien, at his law firm in Corpus Christi. In 2003, Jennifer started law school at South Texas College of Law Houston, her dad’s alma mater. During her time at South Texas, Jennifer participated in STCL’s nationally-ranked advocacy program, including 11 national moot court and mock trial tournaments. In 2006, Jennifer and her mock trial team, including her now-husband Brant Stogner, won the ATLA (AAJ) Student Trial Advocacy Competition in Miami, Florida. During law school, Jennifer was on the Dean’s List, was nominated to the Order of the Barristers, and received the Dean’s Outstanding Student Advocate Award. After law school, Jennifer began her litigation career at a plaintiff’s litigation firm and cut her teeth in the BP Texas City explosion cases. Since that time, Jennifer has practiced as both a plaintiff’s attorney and a defense attorney for individuals, small businesses, and large corporations and handled cases with values ranging from $800 to $80 million+.

Jennifer is married to Brant J. Stogner, a partner with the firm. They met on the first day of law school and have been together ever since. Jennifer has three children, Ryker, Beckett, and Holland, and enjoys spending time with her husband and her family. She has a first degree black belt in Tae Kwon Do. She loves to read, to bake, and to play games with her children and husband.

Jennifer is committed to fighting for the injured victim. She has represented countless individuals and families who were injured or killed because someone else did not put safety first. Jennifer’s motto for her kids and her cases is simple: Safety first, otherwise someone gets hurt.

Jennifer joined the firm as Of Counsel in 2018.

100% of Practice Devoted to Litigation 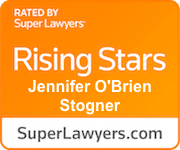 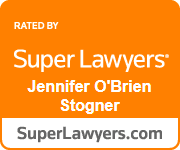