Jonathan D. Sneed has dedicated his law practice to helping injured people obtain the justice they deserve. As a fifth-generation Texan, Jonathan’s practice is based on the same values passed down by his family: hard work, integrity, and discipline.

Jonathan graduated from South Texas College of Law Houston where he received both state and national recognition for his skills in trial advocacy. During law school, Jonathan was honored as one of the country’s leading legal brief writers and was selected to serve on the school’s Board of Advocacy. He also had the privilege of interning for the Harris County District Attorney’s Office.

Prior to law school, Jonathan attended Texas A&M University where he studied Construction Science, Business, and Spanish. During his education, Jonathan served as President of the Construction Science Honor’s Society and was an active contributor to community housing projects in the Bryan/College Station area. Jonathan also participated in the university’s international exchange program where he studied international business and negotiations at the Instituto Tecnológico in Monterrey, Mexico. 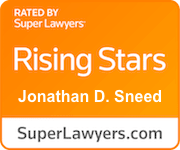