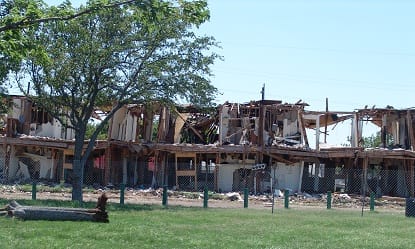 CF Industries is facing another lawsuit related to the devastation caused by the West Fertilizer Plant explosion. Attorneys Mo Aziz of Abraham, Watkins, Nichols, Agosto, Aziz & Stogner and Chad Pinkerton of The Pinkerton Law Firm have filed a lawsuit on behalf of a J&B Realty, LTD. The company owned and operated rental property in West that was damaged or completely destroyed in the April blast.

“In addition to the numerous victims that were killed and injured by the ammonium nitrate blast, the real property and businesses in West sustained wide-spread damage as well,” commented Texas lawyer Mo Aziz. According to reports of the April blast at the West Fertilizer Plant in West, Texas, more than $100 million worth of property damage resulted from the explosion.

An entire apartment complex belonging to J&B Realty was leveled in the blast and several other properties were made uninhabitable after ammonium nitrate at the West Fertilizer Plant became unstable, resulting in a massive explosion. Other than the destroyed apartment building, what is left of the rental property that formerly served as a source of income for J&B Realty is no longer habitable and cannot be rented.

“The apartment complex that we represent was completely destroyed by the blast. In addition to structural damages, we are also claiming business interruption losses, that is, lost rental income,” noted Aziz.

Aziz asserts in the lawsuit that CF Industries was negligent in designing, manufacturing, marketing, and selling the combustible material without taking the simple step of using an additive that would have decreased the chance of a serious or fatal explosion fueled by the fertilizer component, according to the products liability lawsuit.

Attorneys Mo Aziz and Chad Pinkerton have been actively advocating for the rights of the people who were harmed in the West, Texas explosion. Separate from the recently-filed property damage lawsuit, both lawyers are also representing more than 50 victims or surviving family members of the catastrophic blast.

The personal injury lawyers of Abraham, Watkins, Nichols, Agosto, Aziz & Stogner have been protecting injured people and their families throughout Texas for 70 years. To reach attorney Mo Aziz, or any of the injury attorneys at Abraham Watkins, contact the firm online or at 713-222-7211. The firm offers a no cost, no obligation consultation and can help you understand your rights when a sudden tragedy permanently changes your life.