After the improper filling of a morphine prescription at a Houston-area pharmacy led to a deadly overdose, Houston medical negligence lawyer Mo Aziz is seeking justice for the family. 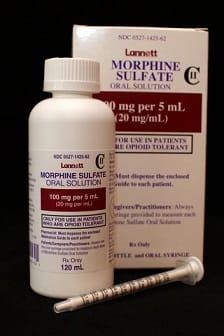 According to the lawsuit, Cullen Care Pharmacy received a prescription request for 70ml of a Morphine Sulfate Suspension mixed at a 10mg/5ml concentration from a doctor at Texas Children’s Hospital. The pharmacy filled the prescription at a concentration of 100 mg/5mL, which amounted to a tenfold overdose from the actual prescribed amount.

Within a day of picking up the prescription from Cullen Care Pharmacy and administering the morphine as per doctor’s orders to her daughter who was suffering from sickle-cell anemia, the Houston mother’s worst nightmare occurred: her daughter died in her sleep. The Harris County Medical Examiner determined the cause of death was morphine toxicity.

The medical negligence lawsuit seeks to hold Cullen Care Pharmacy responsible for the malpractice committed by one of its pharmacists or technicians in misdosing the morphine. In coming forward with this heart-breaking case, the family of the young girl also seeks to stop others from going through the same heartache by increasing awareness of just how dangerous or deadly one pharmacy mistake can be.

The lawsuit was filed on August 20 in Harris County.

A press conference to discuss the newly-filed medical negligence case will be held at the office of Abraham Watkins at 800 Commerce Street at 2pm on Tuesday, August 20. The press conference is open to all media; for questions about attending, please contact the firm at (713) 222-7211.

Houston lawyer Mo Aziz is a partner at the Texas personal injury law firm of Abraham, Watkins, Nichols, Agosto, Aziz & Stogner. Since 1951, the firm has dedicated its practice to protecting the right of those who have been injured throughout Texas by the negligent, wrongful or intentional bad conduct of another person or business.

When serious injury or death was caused by a truck accident, motor vehicle accident, workplace accident, medical negligence, defective product or an oil or gas explosion, Abraham Watkins has been there for the survivors and their families, helping them recover for their losses. The firm can be reached online or at (713) 222-7211.