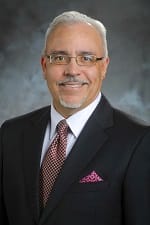 (HOUSTON, TEXAS) – Attorney Benny Agosto, Jr., a partner at the Houston law firm of Abraham, Watkins, Nichols, Agosto, Aziz & Stogner, has been selected for inclusion on the 2016 Nation’s Top One Percent list by the National Association of Distinguished Counsel (NADC). This is the second year in a row that he has been recognized.

Through the “Nation’s Top Attorneys” selection process, the NADC identifies and recognizes the nation’s finest attorneys.

Mr. Agosto is highly respected in the legal field and has received numerous recognitions and awards throughout his career. He is certified in personal injury law by the Texas Board of Legal Specialization. He has appeared on the Texas Super Lawyers list every year since 2006. He received the President’s Award from the Houston Bar Association and the President’s Award from the State Bar of Texas, both in 2015. Since 2013, Houstonia magazine has named Mr. Agosto to its Top Lawyers – Personal Injury list. He received an AV Preeminent® rating from Martindale-Hubbell in 2014.

Mr. Agosto has also been recognized for his contributions to the Hispanic legal community. He received the Peter Torres Jr. Community Service Award and the Outstanding Service and Leadership Award from the Hispanic Issues Section of the State Bar of Texas. He has been named one of the 25 Most Influential Hispanic Lawyers in the United States by Latino Leaders Magazine for 2016. He received the ADL Civil Rights Medal from the Anti-Defamation League. He has also been named as the Hispanic Male Executive of the Year by the Houston Hispanic Chamber of Commerce and Trailblazer Outside Counsel of the Year by the Texas Minority Counsel Program.

Please join the law firm of Abraham, Watkins, Nichols, Agosto, Aziz & Stogner in congratulating Benny Agosto, Jr. on being selected as a member of the Nation’s Top One Percent by the NADC. For more information about Mr. Agosto or to contact an attorney from our Houston office, please email the firm or call (713) 222-7211.