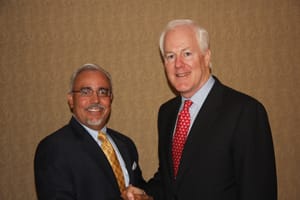 On Friday May 14, 2010, United States Senator John Cornyn, a member of the Senate Judiciary Committee, was in Dallas, Texas to join representatives from the Hispanic National Bar Association (HNBA), the Dallas Hispanic Bar Association, local elected officials, and various other organizations in voicing their unified support for the nomination of Sarah Saldana to serve as U.S. Attorney for the Northern District of Texas. Both Texas Senators, John Cornyn and Kay Bailey Hutchison, have asked 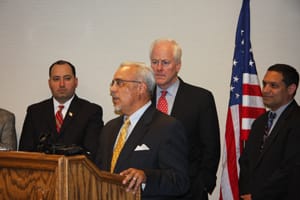 The White House to nominate Ms. Saldana for this important position. Both Texas senators have championed a bipartisan Federal Judicial Evaluation Committee, and received endorsements of numerous bipartisan organizations in the State of Texas. The U.S. Attorney for the Northern District of Texas position has been vacant for over a year. At the press conference in Dallas, Sen. Cornyn emphasized the need for the nomination to move forward, pointing to wide bipartisan support, including endorsement letters from more than ten organizations, including the HNBA. 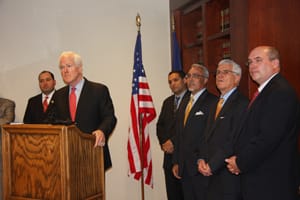 This is a great step forward in getting important vacancies filled on a state and national level. Mr. Benny Agosto, Jr., Board of Governors, was in attendance representing the HNBA. Mr. Agosto stated that he was pleased to be standing “shoulder to shoulder, mano a mano, with Senator Cornyn on this important issue”. Speaking to members of the press, Mr. Agosto commented on the HNBA’s due diligence for endorsing individuals slated for public service as thorough and decisive. On behalf of the HNBA, Mr. Agosto once again offered the endorsement of Sarah Saldana as U.S. Attorney for the Northern District of Texas.

It must be noted, that U.S. Attorney for the Southern District of Texas, located in Houston, has also been vacant for over a year. It is the hope of Mr. Agosto and the HNBA that The White House move forward and nominate qualified and diverse candidates to fill these very important positions.