(Boston, MA) A lawsuit was filed this morning in Boston on behalf of a young couple seriously injured and traumatized while walking on a street in the Boston neighborhood of Allston on Sunday, November 4, 2018, when the façade and parapet of a commercial building suddenly collapsed. Sonya Bandouil, 23, was buried alive under tons of concrete and other rubble that fell from 85 Harvard Avenue, suffering life threatening injuries, including multiple fractures and a hand injury that required the amputation of a finger on her dominant hand. Her boyfriend, Alex Pankiewicz, 25, also injured, worked with other pedestrians in the minutes immediately following the collapse to dig Sonya out.

Defendants in the suit, filed in the Commonwealth of Massachusetts Superior Court, are Moss Realty LLP, owner of the building; Myer Dana and Sons, Inc., the company under contract to manage and maintain the building; and Badoinkas, Inc., tenant of the building and which operates a street level restaurant and bar in the building called, “The Common Ground.” Ms. Bandouil and Mr. Pankiewicz are represented by the Boston office of Kreindler & Kreindler LLP; Abraham, Watkins, Nichols, Agosto, Aziz & Stogner in Houston; and Houston attorney Zafar “Zaf” Tahir.

Among other claims, the law suit alleges several counts of negligence; that “Moss Realty failed, over a period of many years, properly to inspect the façade and parapet of the Property and maintain it in a structurally sound and safe condition;” and that in failing “to maintain the Property in a safe condition created a public nuisance and posed a threat to the health and well-being of every person using the sidewalk adjacent to the Property.”

Numerous injuries and surgeries, including amputation; months of rehabilitation.

When the structure at 85 Harvard Avenue collapsed, Ms. Bandouil, a classically-trained concert pianist and teacher, was knocked to the ground and buried under tons of cement and building debris, threatening her survival. 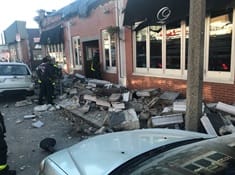 Her injuries were numerous, with multiple fractures of the skull, spine, ribs, pelvis, foot, leg, collarbone and jaw; multiple internal injuries; and a de-gloving crush injury to her dominant right hand that was of such severity that her third finger had to be amputated.

Mr. Pankiewicz, Ms. Bandouil’s romantic and domestic partner, was also struck by falling debris. Although he suffered physical injuries, he was not trapped by the debris, and was able, with the help of passersby, to engage in a desperate effort to rescue Ms. Bandouil by moving the cement blocks and rubble that trapped her. Another passerby called 911.

When Ms. Bandouil was discharged from Spaulding, she returned to the family home in the Dallas, TX, metropolitan area where she is living with her parents undergoing a rigorous course of rehabilitation therapy multiple times a week.

The building that fell upon Ms. Bandouil was built almost a century ago. According to the complaint, “From at least 1950 to the present, members of the Moss family or entities controlled by the Moss family…have owned and operated the Property as a commercial enterprise and have leased the storefronts located on the Property to various retail businesses.”

“This horrific building collapse onto a public sidewalk should never have happened,” said attorney Anthony Tarricone, a partner at the Kreindler law firm who serves as co-counsel to the plaintiffs. “Debris from the collapse shows that the concrete parapet hanging over the sidewalk was in a seriously deteriorated condition for years. It was just a matter of time before it would crumble and collapse, with tons of large concrete blocks falling onto the public sidewalk along the length of the building-unfortunately-while Sonya and Alex were there. Commercial building owners and managers are responsible for maintaining buildings in a safe condition and ensuring that those who pass by or enter the premises are not put in harm’s way by the dangerously deficient structural integrity of the building.”

Houston attorney Muhammad Aziz, who also represents Ms. Bandouil and Mr. Pankiewicz, added, “The problem of crumbling buildings and the hazards they present in Boston and throughout the nation is substantial. Building owners and operators are under a duty to the public to ensure that catastrophic failures like this do not occur. An aspiring pianist’s career has been stolen from her, and this young couple is no doubt traumatized for life.”

For questions regarding the lawsuit, please contact Madison Kauffman at [email protected] or (713) 222-7211.