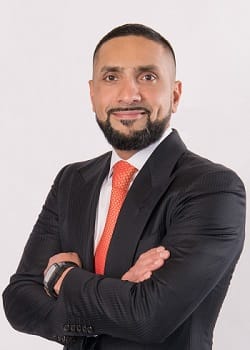 Mo Aziz is board certified in Personal Injury Trial Law by the Texas Board of Legal Specialization. He has obtained over $200 million in settlements and verdicts for his clients over the course of his legal career. In 2014, he was elected to the Houston Chapter of the American Board of Trial Advocates (ABOTA), an invitation-only organization of trial attorneys. Members of ABOTA are experienced attorneys who have a high personal character and an outstanding reputation among their peers. Recently, he was recognized by the South Asian Bar Association of Houston (SABAH Houston) with the Distinguished Member Award for the significant contributions he has made to the legal community during his career through his personal qualities and exceptional skills. He was only the third attorney to receive this award from SABAH Houston.

Mr. Aziz is a well-respected trial attorney across the state and nation and is involved in a number of high-profile cases. He served on the Plaintiff’s Executive Steering Committee in the West Fertilizer Plant Explosion litigation for three years and was able to secure settlements on behalf of 95 clients. In 2016, Mr. Aziz secured a confidential settlement within four months for the family of an exploding Takata airbag victim. He currently represents victims of the Las Vegas Route91 Harvest Festival Shooting, female athletes who were sexually assaulted by Larry Nassar, several dozen first responders injured in the Arkema explosions during Hurricane Harvey, and hundreds of homeowners affected by Hurricane Harvey in complex litigation against developers and engineering firms. Most recently, he settled a Title IX lawsuit against Baylor University on behalf of a sexual assault victim.

Please join the law firm of Abraham, Watkins, Nichols, Agosto, Aziz & Stogner in congratulating Mo Aziz on his Super Lawyers honors for 2018. To learn more about Mr. Aziz or to contact him, please email him or call (713) 222-7211.