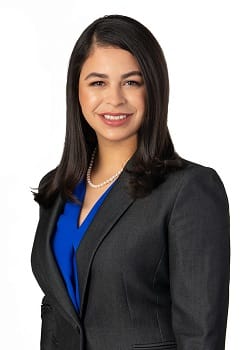 (Houston, TX) Attorney Lena Laurenzo of the Houston personal injury law firm of Abraham, Watkins, Nichols, Agosto, Aziz & Stogner has been named to the Texas Rising Stars list for 2019. This marks Ms. Laurenzo’s third consecutive year to be included on this annual list, which appears in the Texas Super Lawyers and Texas Monthly magazines.

Attorneys included on the Rising Stars list go through the Super Lawyers selection process and are chosen based on nominations, independent research, and peer evaluation. Ms. Laurenzo’s inclusion on this list indicates that she is among the top 2.5 percent of attorneys in Texas under the age of 40, or among those who have been in practice for 10 years or less.

During the course of her legal career, Ms. Laurenzo has exclusively practiced personal injury and maritime law. She has successfully litigated numerous cases to settlement or verdict, including her first trial in which she co-led a wrongful death case that resulted in a jury verdict of $17,720,000. Since joining Abraham Watkins as an associate in 2019, Ms. Laurenzo has continued to represent individuals and families who have been injured or killed by the negligence of others. Her current practice covers a wide variety of personal injury matters, including private and commercial automobile accidents, pedestrian accidents, Jones Act and maritime cases, workplace injury, and wrongful death.

Please join Abraham, Watkins, Nichols, Agosto, Aziz & Stogner in congratulating Lena Laurenzo on being named to the Texas Rising Stars list for 2019. To learn more about Ms. Laurenzo or to contact her, please email her or call (713) 222-7211.