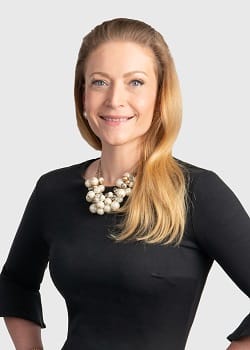 (Houston, TX) Attorney Jennifer O’Brien Stogner of the Houston personal injury law firm of Abraham, Watkins, Nichols, Agosto, Aziz & Stogner has been named to the Texas Rising Stars list for 2019. This marks Mrs. Stogner’s second consecutive year to be included on this annual list, which appears in the Texas Super Lawyers and Texas Monthly magazines.

All attorneys named to the Rising Stars list go through the Super Lawyers selection process and are chosen based on peer nominations and evaluations and research gathered by Super Lawyers. Mrs. Stogner’s inclusion on this list indicates that she is among the top 2.5 percent of attorneys under the age of 40 in Texas or who have been in practice for 10 years or less in Texas.

Mrs. Stogner is an experienced trial attorney who has represented both plaintiffs and defendants, including individuals, small businesses, and large corporations. She joined Abraham Watkins as Of Counsel in 2018 and represents individuals and family members who have been injured or killed by the negligence of another. Her current practice focuses on a wide range of personal injury matters, including wrongful death, catastrophic injury, car and trucking accidents, construction accidents, product defects including automobiles and tires, traumatic brain injuries, explosions, medical malpractice, and insurance litigation.

Mrs. Stogner is a graduate of Texas A&M – Corpus Christi and South Texas College of Law Houston. While in law school, she was a member of the school’s nationally-ranked advocacy program and participated in 11 national moot court and mock trial tournaments. In her final semester at South Texas, she won a Regional and National Championship in mock trial during the ATLA National Trial Competition. She was also on the Dean’s List, was nominated to the Order of the Barristers, and was a recipient of the Dean’s Outstanding Student Advocate Award.

Please join Abraham, Watkins, Nichols, Agosto, Aziz & Stogner in congratulating Jennifer O’Brien Stogner on being named to the Texas Rising Stars list for 2019. To learn more about Mrs. Stogner or to contact her, please email her or call (713) 222-7211.