I am happy and blessed to be an advocate and a voice of legal advice for almost five million DACA young immigrants across the country, who today wake up to more questions than answers about their future. DACA, which stands for Deferred Action for Childhood Arrivals, is a program that allows undocumented immigrants who came to the United States as children, to stay in the country and work legally. It has been officially reported that on Monday, February 16, 2015, a federal judge in Texas, Judge Andrew Hanen, issued an order that has temporarily blocked President Barack Obama’s executive action on immigration. The preliminary injunction is related to a program known as Deferred Action for Parents of Americans and Lawful Permanent Residents (DAPA).The DAPA program allows undocumented parents of lawful United States citizens, or permanent residents to defer deportation and seek job benefits.

In a 123 paged opinion, Judge Hanen issued an injunction to temporarily prevent the Obama administration from implementing the deferred deportment program, which was the executive action President Obama took in late 2014 to safeguard as many as five million undocumented immigrants from deportation. Judge Hanen’s ruling comes two days before the United States Citizenship and Immigration Services was set to start accepting applications for the program. Specifically, part of the DAPA program was to take effect on Wednesday, February 18, 2015, which would have expanded deportation protections for individuals who were brought into the country illegally when they were children. Furthermore, protections afforded to the parents of United States citizens and permanent residents were expected to take effect in May of this year.

Judge Hanen granted the preliminary injunction after hearing arguments in Brownsville, Texas last month. He wrote in a memorandum accompanying his order that the lawsuit should proceed forward and that without a preliminary injunction the states will “suffer irreparable harm in this case.” Texas is joined by 25 other states: Alabama, Arizona, Arkansas, Florida, Georgia, Idaho, Indiana, Kansas, Louisiana, Maine, Michigan, Mississippi, Montana, Nebraska, Nevada, North Carolina, North Dakota, Ohio, Oklahoma, South Carolina, South Dakota, Tennessee, Utah, West Virginia and Wisconsin. Judge Hanen concluded that at least Texas had standing in federal court to pursue its lawsuit as Texas “stands to suffer direct damages from the implementation of DAPA.” The lawsuit, calling into President Obama’s executive actions, was filed on or about December 3 2014, in in the United States District Court for the Southern District of Texas. 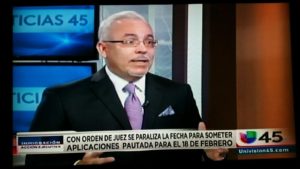 The 26 states complain that the lawsuit is not about immigration, but rather “rule of law, presidential power, and the structural limits of the U.S. Constitution.” In their complaint, the 26 states sought relief under the concept that the President’s executive action overreached the limits of his authority because the Department of Homeland Security directives implementing the President’s plan violate the “take care that the laws be faithfully executed” clause of the United States Constitution. The complaint also alleges that the administration failed to comply with the Administrative Procedure Act, which mandates the Executive Branch afford a longer notification and public comment period before taking certain executive actions.

In light of this, Judge Hanen sided with the 26 states and granted temporary relief in hopes that the parties could come to a resolution. Judge Hanen’s order permits the 26 states, plaintiffs in the lawsuit, the opportunity to proceed with their lawsuit that would permanently halt President Obama’s orders. Judge Hanen ordered that the parties are required to come to an agreement on the issue at hand no later than Friday, February 27, 2015.

Many Republicans, showing tremendous support in favor of Judge Hanen’s ruling, have issued statements saying that Judge Hanen’s decisions is a victory for the rule of law. Hanen wrote, “The Court seriously doubts that the Supreme Court, in holding non-enforcement decisions to be presumptively unreviewable, anticipated that such “non-enforcement” decisions would include the affirmative act of bestowing multiple, otherwise unobtainable benefits upon an individual.”

The administration will continue to support the President, arguing that the President did act within his constitutional powers. Supporters of President Obama’s actions are confident that the expansions of the DACA and DAPA programs will eventually be implemented and take effect in this country. However, that is not to say that there is a long legal battle ahead. The White House stands behind the President’s actions and said in a statement today, Tuesday, February 17, 2015, that the President’s actions “are well within his legal authority” and that the Justice Department will be appealing the decision. The White House continues to defend President Obama’s executive orders issued in November 2014, saying that the United States Supreme Court and Congress have clearly afforded federal officials the power to establish priorities in enforcing this country’s immigration laws. The appeal will be heard by the United States Circuit Court of Appeals for the Fifth Circuit in New Orleans, Louisiana.