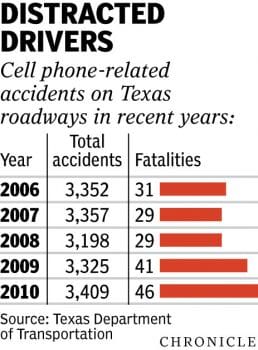 In our last post, we discussed the National Transportation Safety Board’s (NTSB) investigation into the fatal pileup in Missouri in August 2010 that involved 2 school buses, an 18 wheeler and a pickup truck. The investigation suggested that the accident was caused by distracted driving. This accident, coupled with an increasing number of distracted driving car accidents (see image provided by the Houston Chronicle for Texas’s numbers), prompted the NTSB to suggest that all states ban the use of portable electronic devices and cellphones for non-emergency use.

It is doubtful, however, that all states will follow the NTSB’s suggestion. The call for a nationwide ban would require all 50 states to pass laws individually that ban the use of cellphones and other communication devices while driving, except in an emergency. While the NTSB recommendation does influence federal and state lawmakers, it is not in any way binding, nor does it create a duty on the part of any individual state. It is also very difficult to prove distracted driving and cellphone use, from the point of view of law enforcement.

The state of Texas is particularly unlikely to heed the NTSB warning.

In Texas, many laws prohibiting cellphone use while driving have failed in the legislature, and Governor Perry would likely veto any such bill that reached his desk, so such laws would have to be made at the local levels.

Several individual cities have passed cellphone ordinances to stop texting and emailing while driving, but law enforcement authorities are having problems enforcing those rules. Some Texas authorities support handheld bans but do not see any issues with hands-free devices being used while operating a motor vehicle.

Because the matter is highly contested in the state Texas, is unlikely that all areas of Texas would be willing to adopt local laws.

Source: Houston Chronicle, “Texas not likely to follow feds’ call to ban cellphone use while driving,” 12/14/11.