David Baluk is dedicated to helping people who have been injured by the actions of another. He is a zealous advocate for those who have been wronged and takes each case personally. During his career, David has successfully litigated numerous automobile and trucking accidents, pharmaceutical, premises liability, products liability, workplace injuries, toxic tort and chemical exposure cases.

Following law school, David worked for two prominent firms, litigating cases in over twenty-three (23) states while obtaining several multi-million dollar verdicts and favorable settlements on behalf of his clients. After honing his skillset in courthouses throughout the United States, he  returned to Abraham, Watkins, Nichols, Agosto, Aziz & Stogner in 2021.

When he is not in the office, David enjoys spending time with his wife, Jennifer, and their Chihuahua, Foxy. 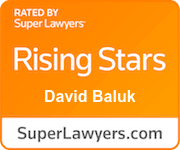